Saltwater Fly Fishing can be very challenging and in some areas of the South African coast and even more so if you are a newcomer to the game. Local knowledge is probably one of the most important aspects of saltwater fly fishing as finding fish is the key to success. You can have the best equipment and even have the know-how, but if you aren’t casting your fly where the fish are then you are just going to get sun burnt with nothing to show for it. Most of us predominantly target fresh water species on fly as we reside inland, and we only get the opportunity to target saltwater species over the December holidays, but there are a fortunate few of us that get to chafe in the salt on a regular basis.

There are also other factors to consider before taking on the salty stuff, like tides and lunar cycles to name a couple, and even if all the planets line up and you are wearing your lucky cap, that might not be enough to persuade a fish to eat your fly. 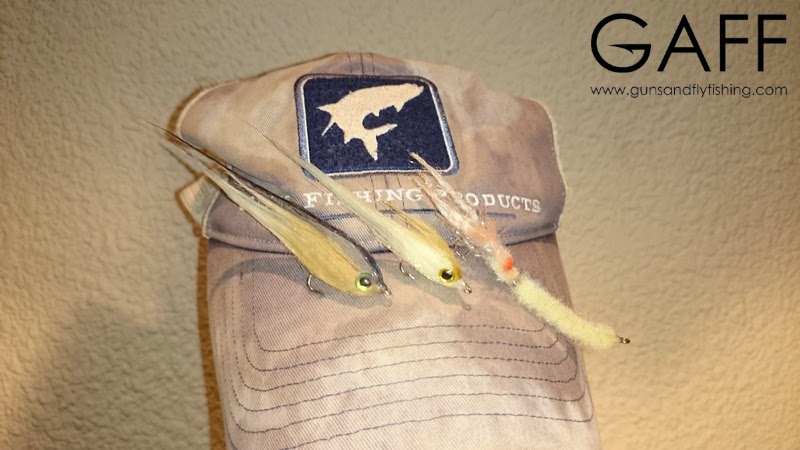 Weeks are usually spent in advance of the holiday to tie flies and familiarize yourself with saltwater species, productive spots and tactics. Magazines are read, videos are watched and online fly fishing forums are a buzz of questions and advice. In my opinion the best way to tackle an unfamiliar territory or species on fly (fresh or saltwater) is to make use of a professional guide’s services. This will save you time, money and a lot of frustration. It is also very healthy for the fly fishing industry as it insures that some people can make a living whilst pursuing their (and our) passion.

GAFF headed to the Garden Route of South Africa over the December holidays where we met up with Henkie Altena from Flydotfish. We booked his services for a day of guiding on the Swartvlei estuary in Sedgefield, in hope of catching some Garrick (Leervis) and Grunter. Henkie is a full time professional fly fishing guide and the owner of Flydotfish . Some of the species and destinations on offer include Tigerfish in Botswana, estuarine species in the Garden Route as well as Yellowfish in the Gouritz River only to mention a few.

We made use of 9ft 8wt and 9wt TFO BVK rods and Shilton SL5 and SL6 reels, all loaded with floating lines. We agreed that the 8wt is better suited as a general estuary rod whereas the 9wt would have its advantages over the 8wt when casting big flies for big fish in the surf. We made use of 9ft 15lbs non tapered fluorocarbon leaders for targeting Garrick and we used a non-slip mono loop knot for our leader to fly connections. A loop knot enables the fly’s natural movement which could just be what is needed to trigger the fish to eat your fly.

Henkie is not just a great guide but also a brilliant fly tier and he brought us some of his favourite patterns for targeting Garrick and Grunter in Swartvlei. Two baitfish imitations and one sandprawn imitation made up our arsenal for the day as well as ‘n foam popper. Garrick love foam poppers and Henkie makes use of a loose popper head or Garrick which can be put in front of any fly, making it a very versatile addition to your flybox.

We started the day by casting foam popper heads in front of craft-fur baitfish imitations, a combination which soon yielded some positive results. We were fishing a deep drop off on a pushing tide in hope of catching some Garrick patrolling the sudden change in depth for mullet and other baitfish. Emile got into a nice Garrick and shortly after that Stephan lost a big fish estimated at 70 cm plus. I had a couple chases from some Garrick but no commitment to eat the fly. 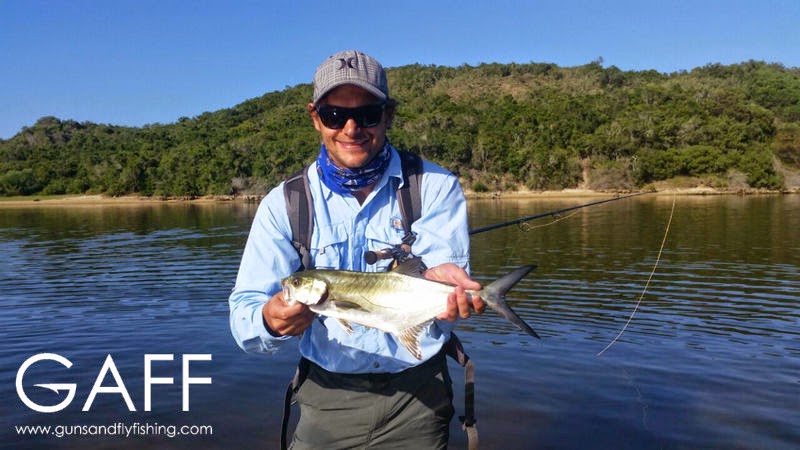 Things became quiet and we headed for the flats. We changed patterns to our sand prawn imitations which very accurately mimic the sand prawn’s natural movements in the water by means of incorporating articulation in the fly. Henkie has put a lot of thought into the pattern and it has produced some exceptional fish of late.

Unfortunately the wind started to pick up radically which made it rather challenging for us to put in accurate casts to the tailing Grunter. Despite the wind we had a couple of opportunities to cast to the feeding Grunter but our offerings were rejected by our wary adversaries.

Grunter are known to be one of the most difficult fish species to be caught on fly and even if your fly is well presented the chances are good that it will be rejected. This just makes it even more rewarding when you finally get to catch one on fly. 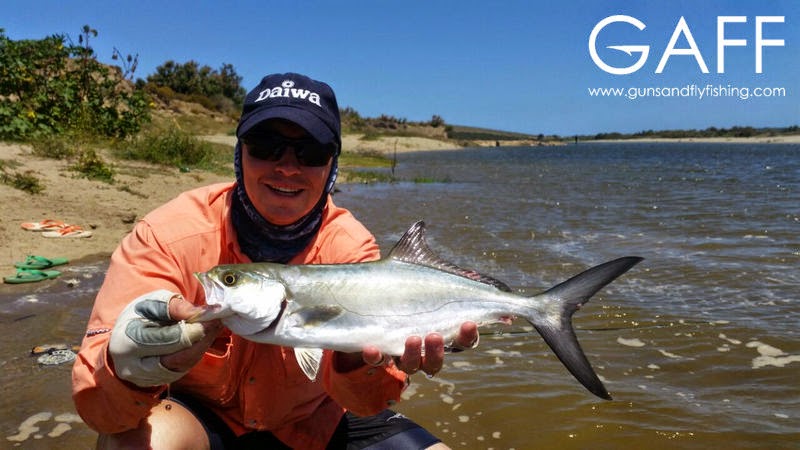 A couple of days later Stephan and Emile went to the Gouritz river mouth and I revisited the Swartvlei estuary in Sedgefield, but this time I was accompanied by Richard Simpkins from Urban Fly Fishers. The rain was pouring down and we only managed to land a Mullet and a little Garrick, but we still had some good fun. Stephan and Emile however had a good day on the water at Gouritz and they had some decent Garrick to show for their effort. 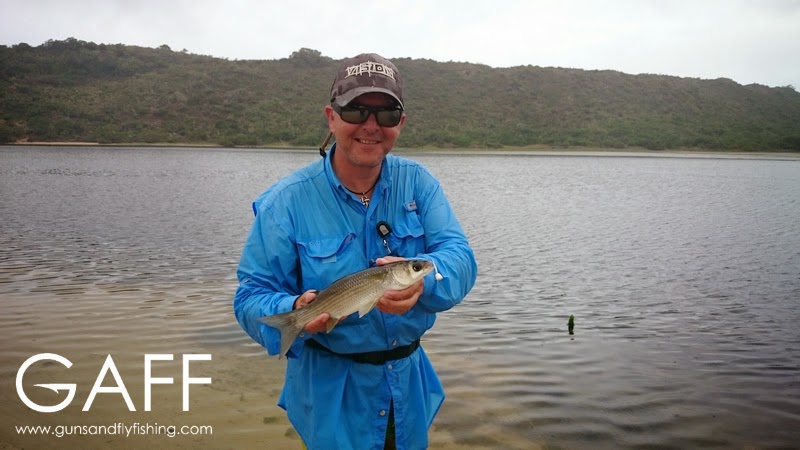 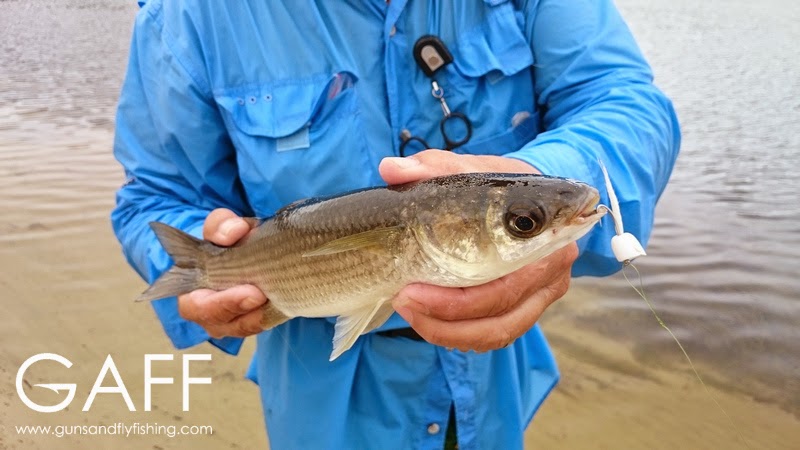 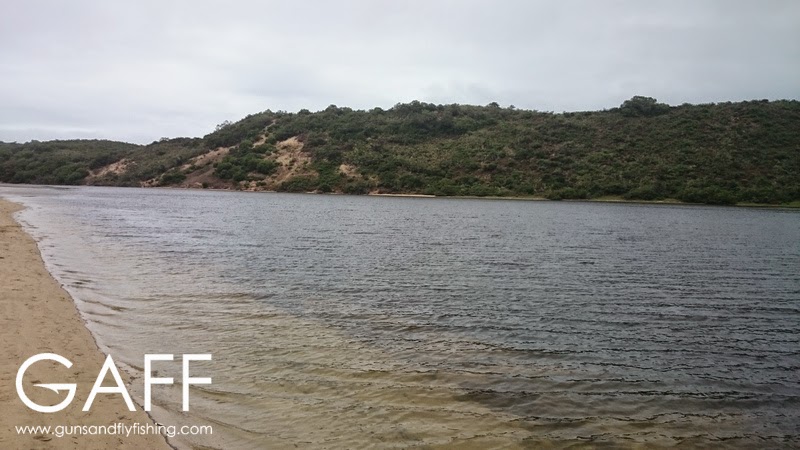 To summarize, we really had a good time targeting Garrick and Grunter on fly over the holidays and we will definitely be back to target some of the bigger fish sometime in the near future. So, if you are also keen on targeting some saltwater and estuarine species on fly in the Garden Route area, feel free to contact and book with Henkie Altena from Flydotfish, you will not be disappointed. 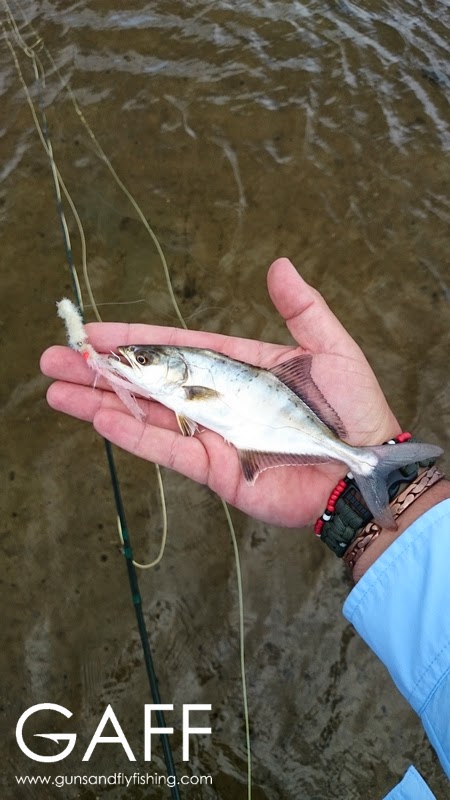 *Please note that all fish that were caught were safely released again.

Nymphing on the Vaal River