Just like people, firearms can also get old (although they tend to age better than us) and with age their looks can also deteriorate. Scratches, rust and general wear and tear takes its toll and before you know it your once prized firearm can seem a bit dull and tarnished after a few years, when compared to its former glory.

About a year ago I bought a CZ 75 (Pre B) 9mm Parabellum pistol for a very good price. It was clearly evident that the pistol did not work much but it had some visible signs of holster wear; which is to be expected after 33 years of service to the previous owner. There were a few scratches here and there and the original factory blue finish had come off on certain areas, but it was still 100% mechanically sound and being a CZ 75 it was only a toddler in terms of its lifespan. 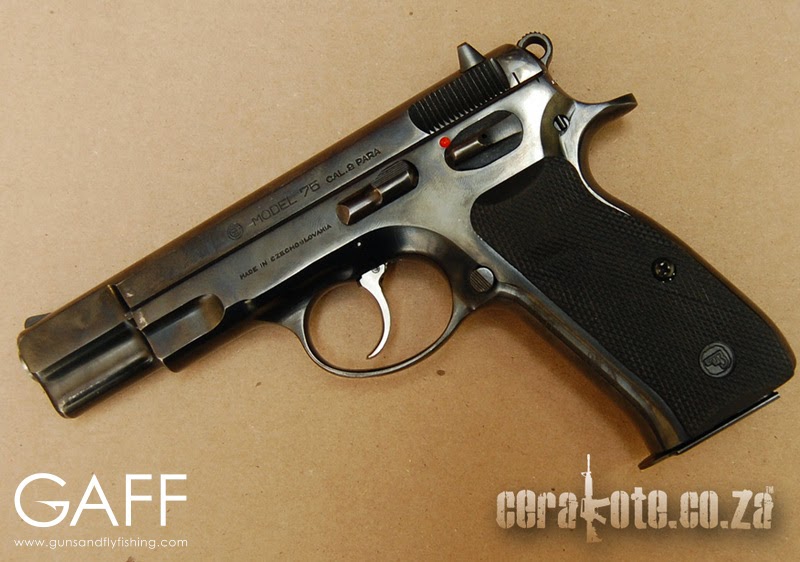 Whilst searching the internet for advice on re-blueing CZ 75 pistols similar to mine, I came across a new concept to me at the time; it was a firearm finish consisting of a ceramic coating called Cerakote. I was intrigued by the variety of colours that the application was available in as well as the properties in terms of durability that the Cerakote coating consisted of.

I then looked for a reputable Cerakote applicator in my region and so I made contact with Piet Van Wyk De Vries from Cerakote.co.za in Centurion, South Africa. Piet is a Cerakote specialist and fulltime Cerakote applicator (unlike most) and his work speaks for itself. He has a rich history in firearm restoration as well as being involved in the continual development of the Cerakote range of products. I made a reservation for my CZ 75’s revamp with Piet, decided on the Cerakote colours that I wanted and then my CZ 75’s makeover began.

For this project we selected 3 colours: Graphite Black for the slide and parts, Smith & Wesson Red for the safety dot and a brand new colour (we are the first to use it in South Africa) called Bright Nickel for the frame. 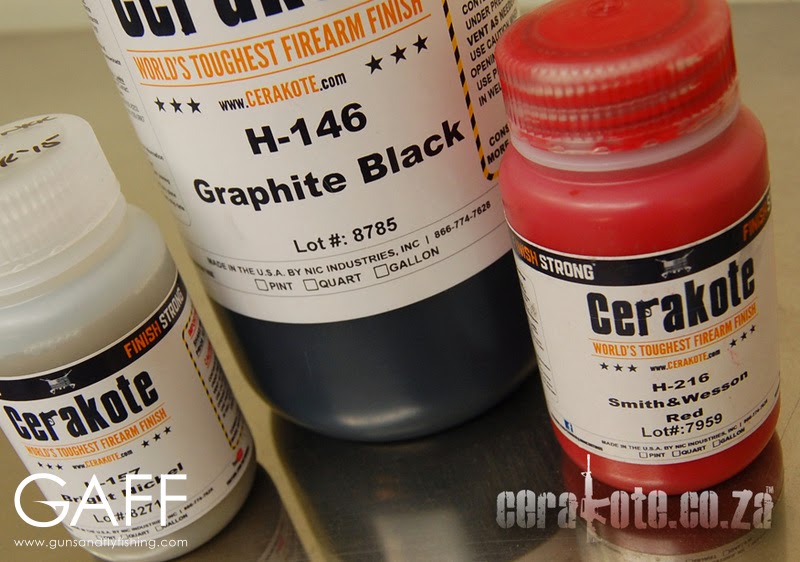 Colour Selections are not only done from pictures on the internet, but there is also a colour chart with each factory colour in actual Cerakote, painted onto a curved aluminium strip. 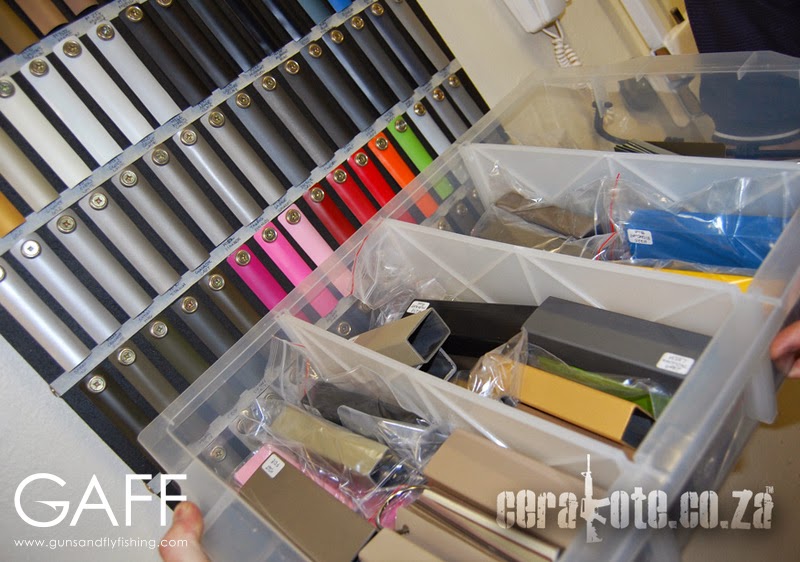 Each colour’s attributes are checked against records of the colour’s technical performance, and meticulous notes kept of every use of any colour, in a spreadsheet. This data is then used to prepare the colours properly for the desired effect in gloss factor, texture and function. An interesting fact is that the Cerakote has to be kept in a fridge for preservation purposes and that it has a shelf life of only 12 months. 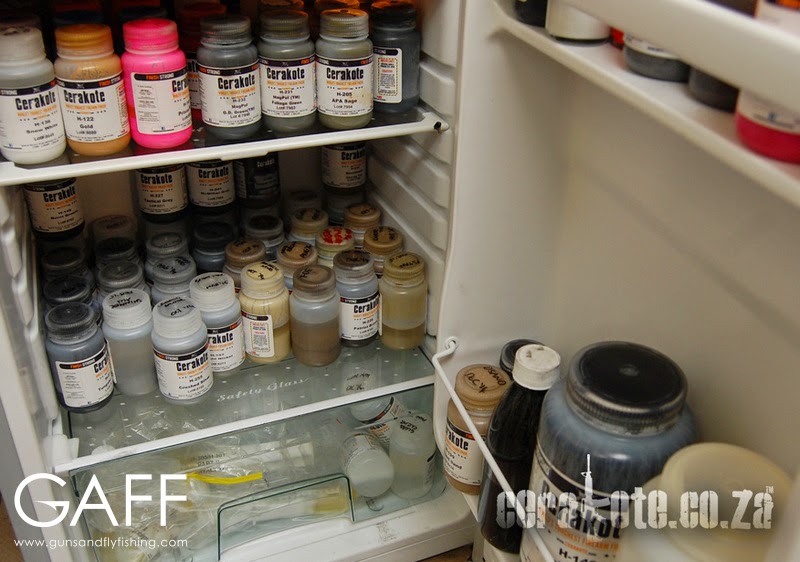 Piet strips the weapon down to the last pin, checking the condition and integrity of every single part as the firearm has to be completely dismantled before starting the prep work in order to apply the Cerakote coating. This serves as an additional service that gives you (the customer) peace of mind that there aren’t any problems with your firearm that you did not know about. 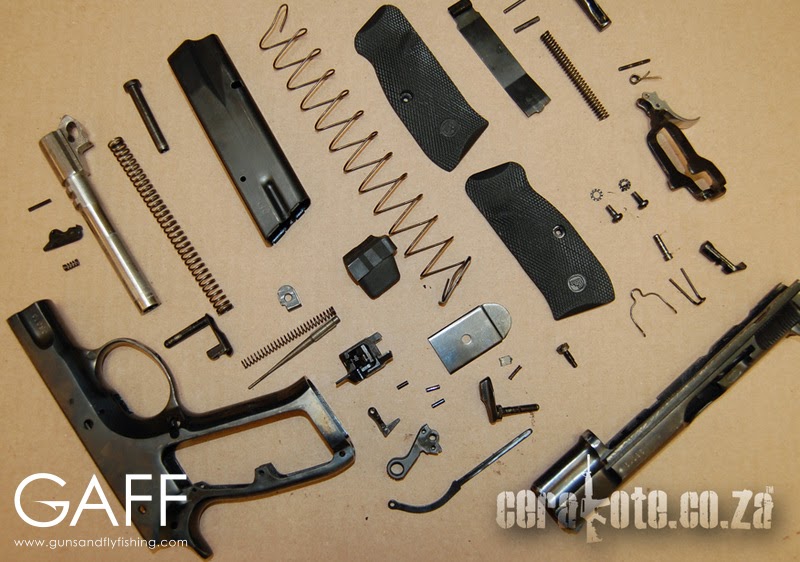 Piet recalls stripping a pistol for a customer not too long ago, only to find out that the person had been carrying his pistol on him every day for the last 6 months with a broken firing pin!

After disassembly, the parts go into a degreasing solution. The degreaser highlights the areas where rust had been building up microscopically and any oil or other forms of moisture is extracted during this process. The parts then get blasted by a very specific type of aluminium oxide at a specific pressure, to create an optimal keyed surface for the ceramic coating to bind with.

During blasting and the final prep stage, every hook and cranny of the firearm is inspected and Piet makes sure that all of the previous coating and dirt residue is removed from the firearm (there are times when he has to make use of dentist tools to do this).

The Cerakote is the mixed with a catalyst in a measuring tube, after which it is then strained, filtered and only then does it end up in the spray gun. Piet only uses the best quality spray guns and equipment, which he believes does have an impact on the quality of the Cerakote finish at the end of the day. 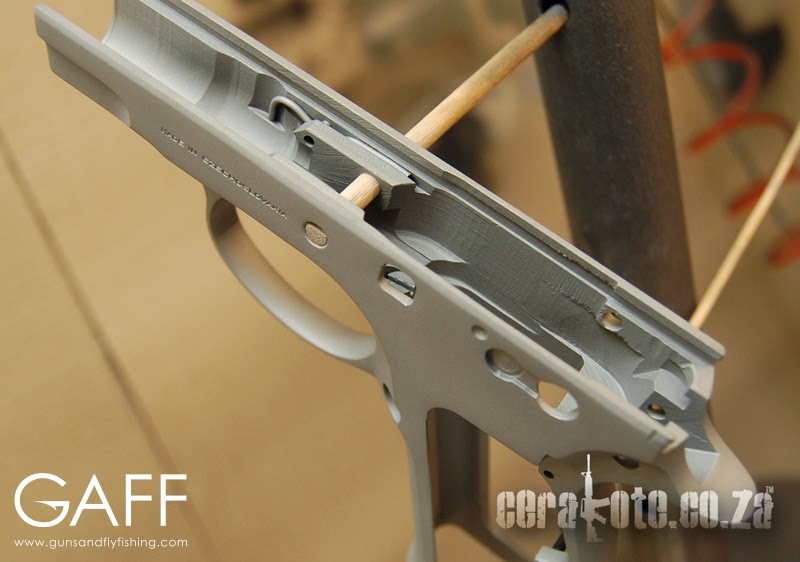 Piet then applies the Cerakote to the firearm parts with the utmost of precision. He ensures an even application is sprayed on all the parts with the inside (working) sections being applied with 14-15 micron of Cerakote and on the outside sections (visible) 24 to 25 microns. Applying a Cerakote finish this precise is not called a hobby, it’s called an art! 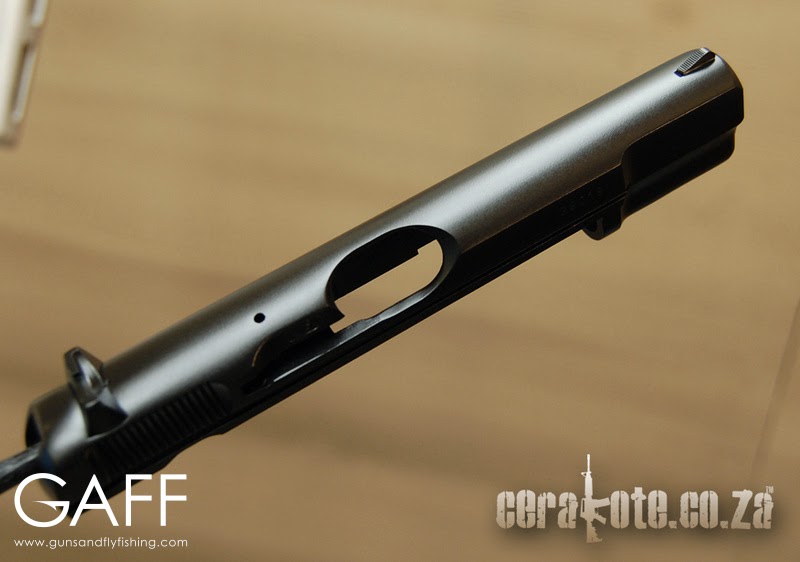 After applying the Cerakote finish, the parts are then checked for evenness, texture, and of course for any other visible defects before they go into the oven to get cured.

Each type of surface has its own required curing time and these curing schedules are a closely kept secret. The curing time does play a major role in the durability and the quality of the Cerakote finish and thus it is important that the coated parts are cured for a specific amount of time. 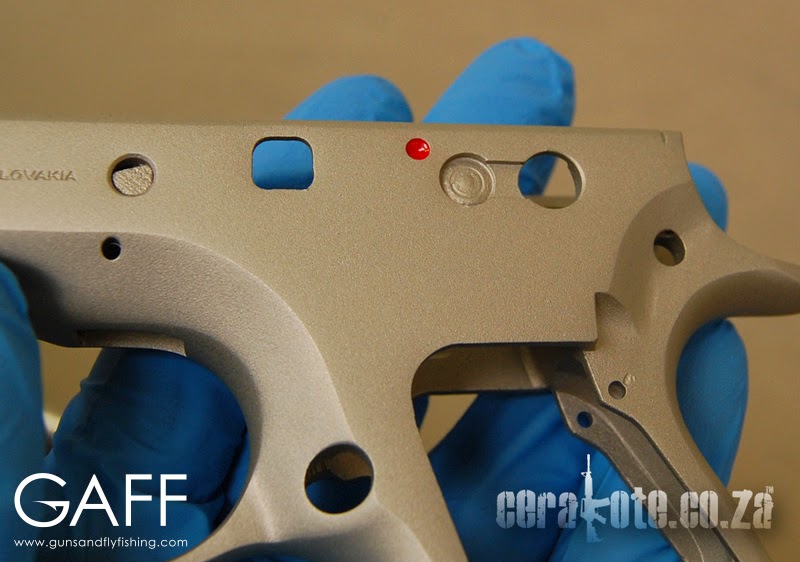 After curing, the parts are cooled down and the quality of the coating is inspected once more. Piet then uses a coating thickness meter to ensure that the Cerakote coating is even all over the firearm. 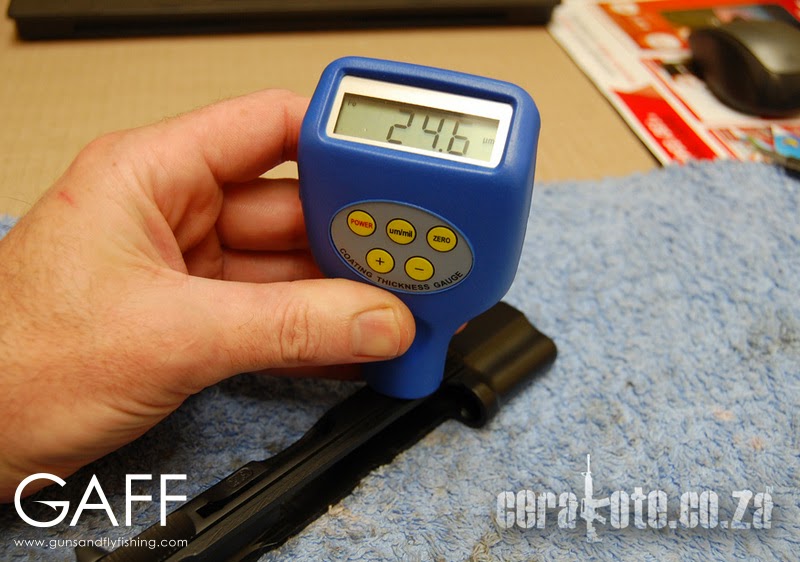 When Piet is happy with the Cerakote finish, he then starts with the re-assembly procedure. Whilst doing this he re-inspects every part before assembly to make sure that there will be no operating problems encountered afterwards.

As you can see it is a very specialised procedure and there is a lot of intensive labour involved in Cerakoting a firearm. The successful preparation of the firearm is vital and it contributes to the durability and quality of the final finish. Cerakote is not a magical, bulletproof coating as some might think but it is more durable, rust and scratch resistant than any other coating commercially available. 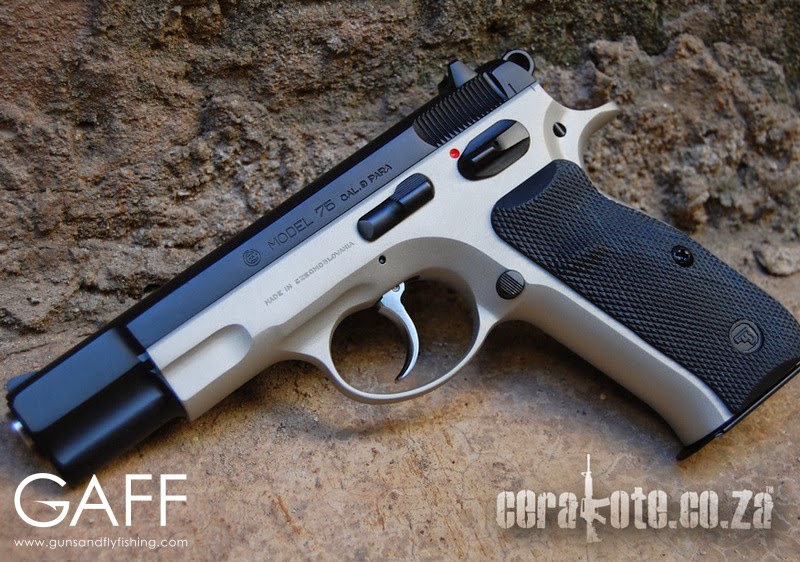 We as people, have our own personalities and identities and because of that we do not look the same. The attractive thing about Cerakote it just that, it gives you the opportunity to visually customize your firearms (old or new) to suit your personal taste and to distinguish your firearms from the hordes of similar factory finished firearms out there. 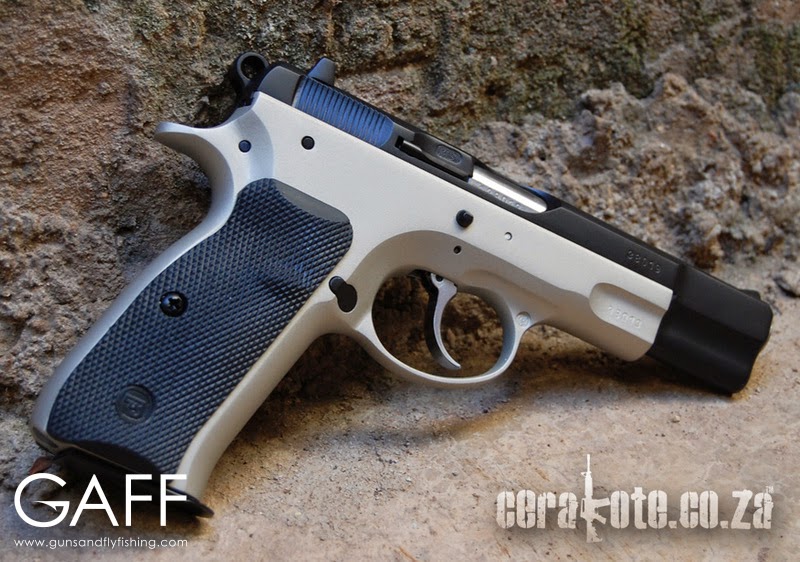 If you are interested in having one or more of your firearms Cerakoted, contact Piet Van Wyk De Vries to make an appointment. Be warned though, he currently has a waiting list as his impeccable workmanship has made his services very popular.