For the better part of 300 years livestock farmers (and more recently game farmers) in Southern Africa have been plagued by Black Backed Jackal (Canis mesomelas) and Caracal (Caracal caracal). It is estimated that Black Backed Jackal and Caracal kill approximately 5500 Lambs PER DAY in South Africa and Namibia. Those 5500 Lambs could have fed in the region of 165 000 people were they to reach a mature age.

Multiply that by 365 and you could have fed 60 225 00 (60 million odd) people over a year’s time with the livestock killed (approximately 2 007 500 sheep) by Black Backed Jackal and Caracal. Now in a country (and continent) where we have a high rate of poverty and where millions of people go to bed hungry each night, you can see why there is a need to control these animals that are killing the livestock.

Disturbing images such as these are seen by game and livestock farmers on a daily basis: 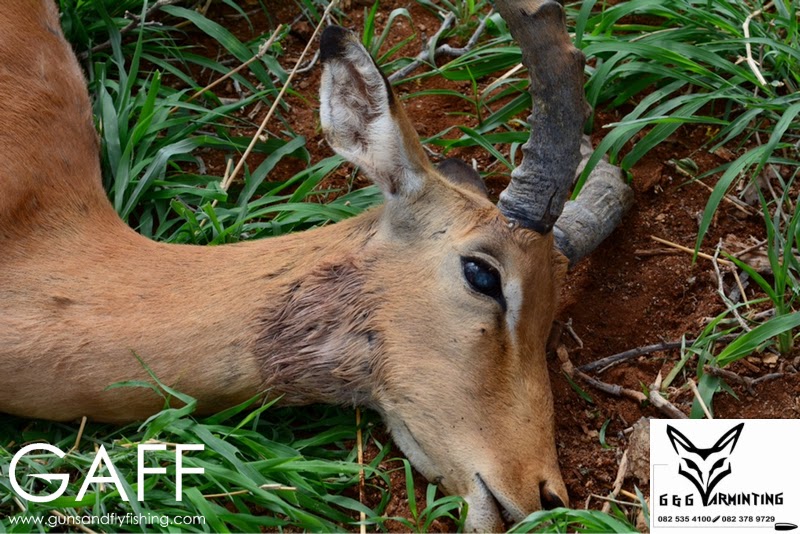 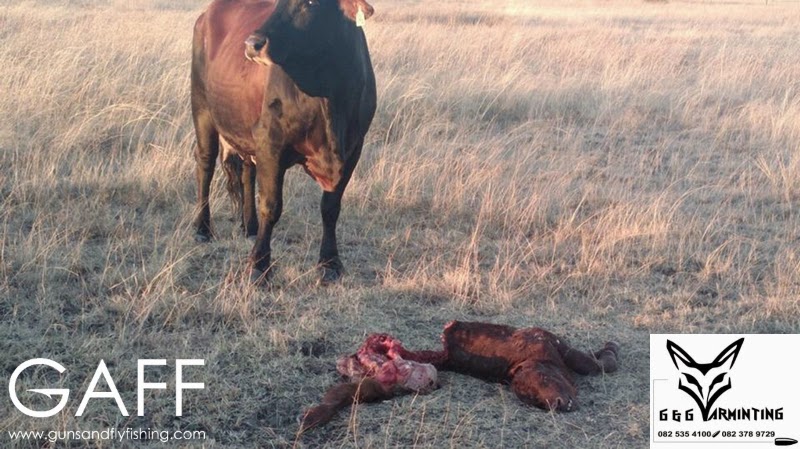 Now my intention is not to deliberately bad-mouth Black Backed Jackal and Caracal, as they do play an important part in the ecosystem, as all God’s living creatures do. They do have a role to fulfill in their natural habitat, as scavengers and by controlling vermin populations. Unfortunately Sheep (and especially Lambs) are an easier and softer target for a Black Backed Jackal that to kill than a Hare for instance. The other problem is that they do not necessarily kill and consume one lamb but they will kill a number of them and not utilize all of the carcasses.

Jackal have an average shoulder height of 45cm and adults can weigh anything between 6-14kg. Jackal are mostly nocturnal in areas where they kill livestock but in some reserves, they can be diurnal as well. Jackal are omnivorous creatures, with their diet consisting of birds, reptiles, carrion, berries, mammals and the reason we hunt them; livestock.

They form pairs that mate for life, unless one dies then the other will take on a new mate. When 2 Jackal pair up, they will establish a home territory. They will defend this to the death. In this territory, they will mark the area with urine and also with their scat along certain points. They also mark the territory vocally by making territorial howls and barks. In this area will be food, water and suitable cover. 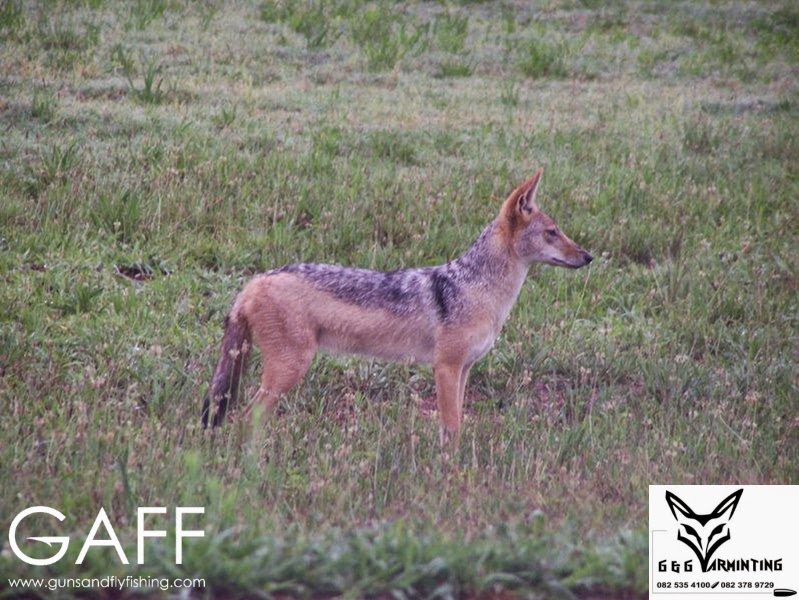 When you see a Jackal during daytime the chances are good that you are in its home territory. This is an excellent area to call for them during night time. A pair of Jackal will start preparing to mate in April of each year. We do not normally start off with a Jackal call when hunting them at this time of year, but rather food calls such as: Rabbits, Steenbok and other small animals. This carries on to the end of July when the pups arrive after 61days of gestation.

Jackal give birth to 1 to 6 pups, but as many as 8 have been recorded. When the pups arrive, it gets easier to call in the Jackal. We then use their protective instinct against them. Sounds that work well are food calls, single Jackal calls and distress sounds of pups. We always try to kill the parents first, and then we dispatch of the pups. Both parents help rear the pups and they visit the dens regularly. They also carry food to the dens, where they regurgitate it in order to feed the pups. 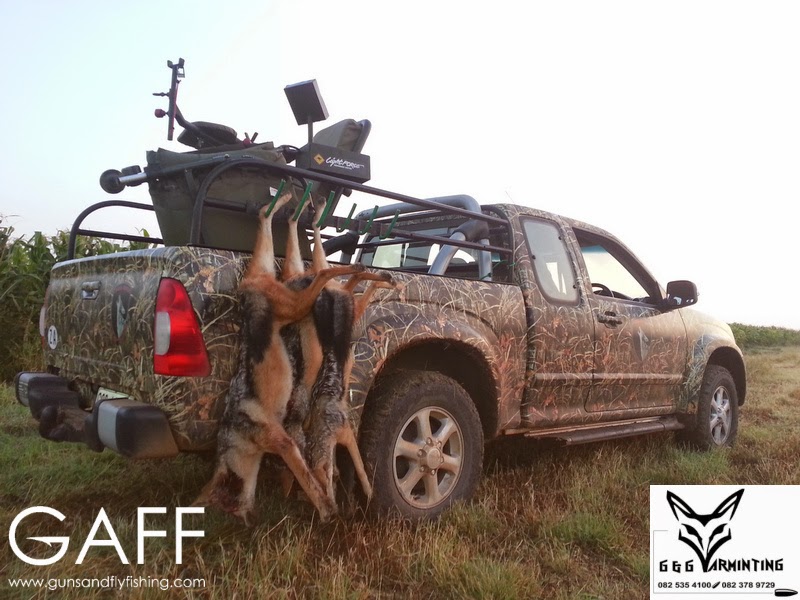 From mid-November through to February/March is when you target the younger Jackal. In this time, the pups are running around, exploring, learning to hunt, and cause havoc with stock, as they generally catch and injure but don’t necessarily kill Sheep. We start off with social Jackal calls and 9 times out of 10, the young ones react. We also use fight and distress calls to utilize their curiosity instinct.

Around January/February, they get the distinctive black saddle on their coats from where the name Black Backed Jackal comes from.

Also known as “Rooikat” or Lynx, this beautiful cat can cause major damage to live stock and game animals. They stand about 50cm high, and can weigh up to 27kg in extreme cases. 1 to 3 kittens are born after a gestation period of around 80 days. Caracal have large territories and they lead a nomadic lifestyle. They are exceptionally strong animals, with a medium sized Caracal being capable of catching a Mountain Reedbuck without any difficulty. 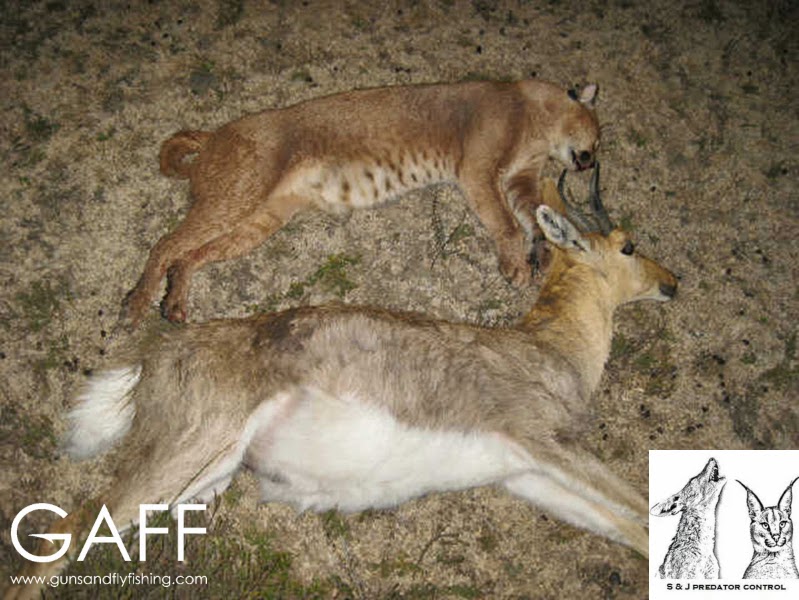 They occupy rocky and dense, bushy areas. Young Caracal walk with their mother for a very long time, so if you shoot a female Caracal, just look around for her young. The chances are good that they will be in the vicinity of where the mother was spotted. Caracal respond very well to raspy sounds suck as Springhare, Scrubhare, and Jack Rabbit distress calls. The “Kiss of death” call also works well. It’s a kissing sound that you make with your lips, similar to when you call a dog.

They are relatively easy to shoot when you can spot them with a light at night time. Keep the light on them and drive towards them until you get inside shooting distance and take the shot. If you come across an animal killed by a Caracal have a look to see if the animal’s carcass has been covered with sand and grass. It’s a tell-tale sign that the Caracal will return to feed at a later stage. Wait from late afternoon for the Caracal to return to feed again, and then shoot it.

To be efficient and successful, you need the following equipment as a bare minimum:

2. Hessian or camo netting to cover your bakkie, especially if it’s white (we use vinyl wrapped trucks nowadays). 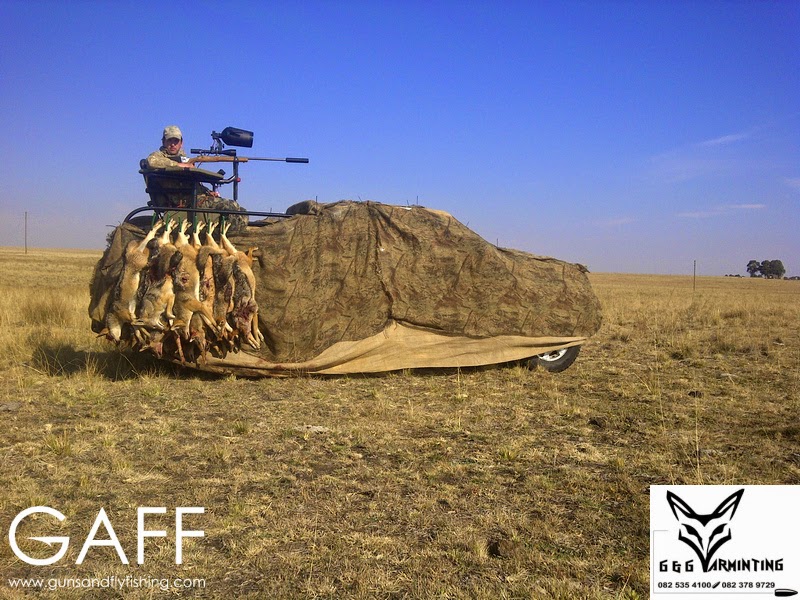 3. Paint colours of a vehicle (if no netting is used) that work well are: Black, red, green, blue, sand, brown.

4. A rotating shooting chair or shooting frame. Chairs can be built by one self, or commercially manufactured chairs can be bought.

6. Remote callers such as: Foxpro (any model), Western Rivers, Tewis Van Oudshoorn, Cass Creek and the like. Personally, I believe Foxpro is the best for calling Jackal and Caracal.

8. A rifle shooting varmint bullets at a minimum of 3300fps and preferably 3500fps and above. 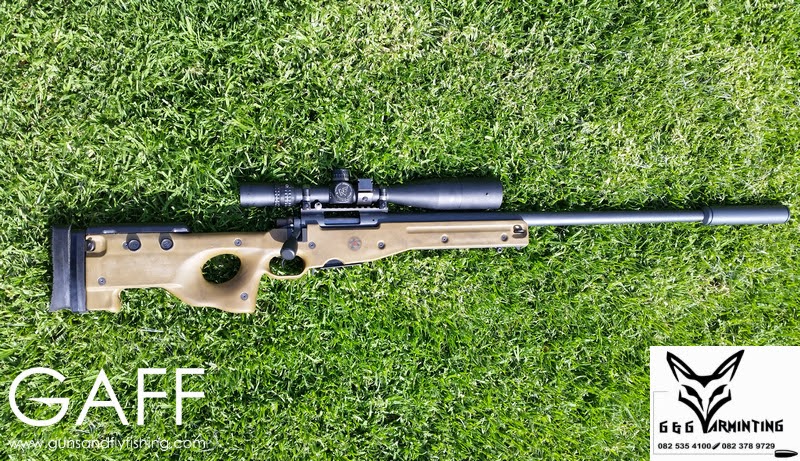 10. A handheld GPS to plot stands, dead Jackal, dens, water and to use bearings to get to Jackal that react to calls. 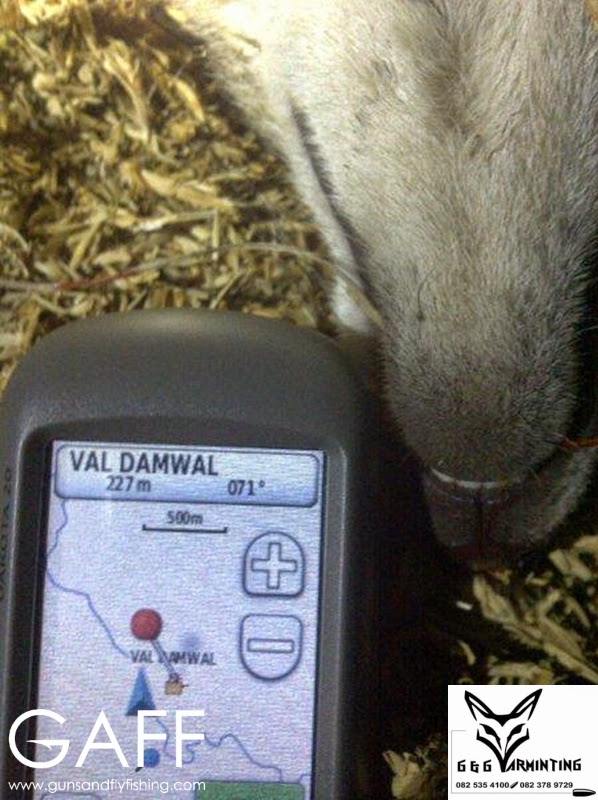 One can easily make 6-8 stands per night. Firstly, you need to know whether or not there are any Jackal in the area you decide to hunt in.

Core-territories are usually the following areas:

– Where Jackal are seen in daytime.
– High ground.
– Close (within 1km) of water.
– Where tracks that go both ways are seen.
– Where Jackal call late afternoon and early morning. 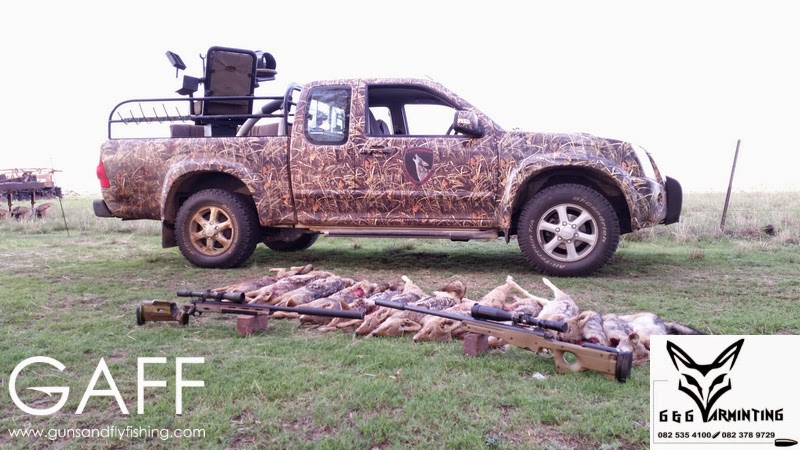 These are very good areas to set up a stand. Find a high spot with a 300m undisturbed view downwind, then you are in business. Dead ground, gullies, treelines etc. are things you definitely don’t want down-wind of you. A Jackal will smell you and associate you with danger.

A good friend and full time Jackal hunter, Taffie Muller has a saying: “a Jackal’s classroom is 450m downwind!” If you want to turn a dumb Jackal into an educated Jackal, then allow them to smell you.

This is what the ideal stand layout looks like: 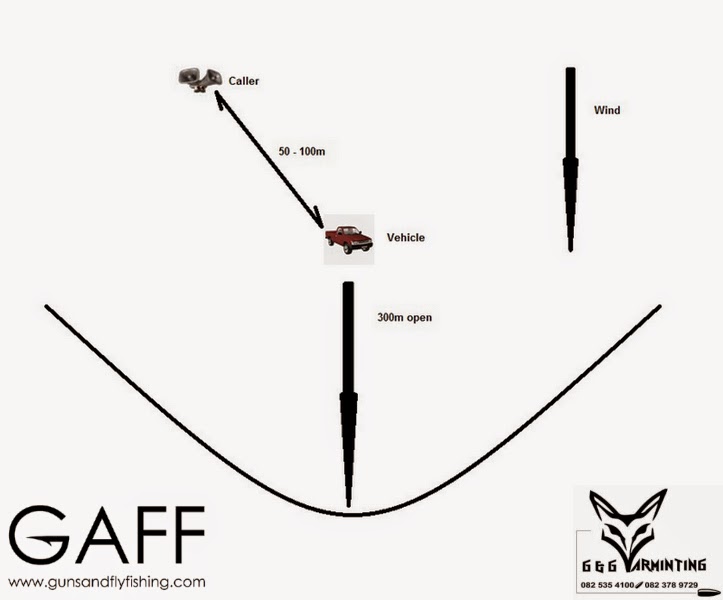 A Jackal will typically come in, and work around the caller, trying to get down-wind of it.

The following image shows why we put the caller diagonally into the wind: 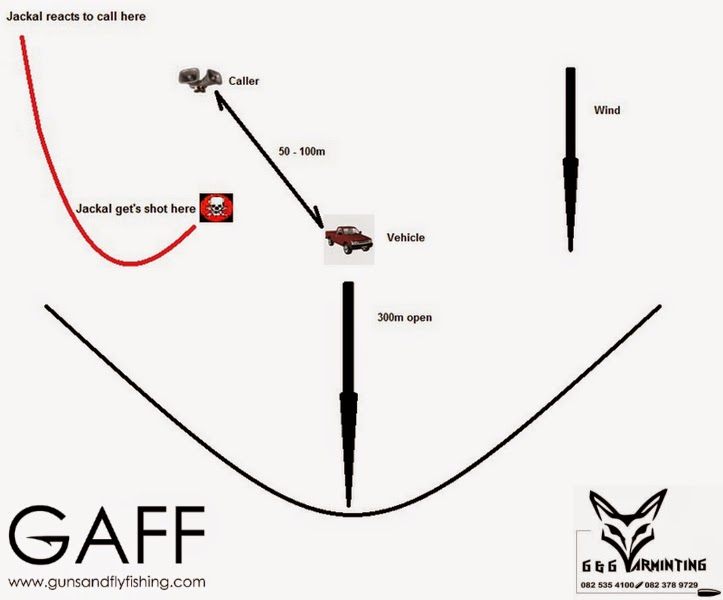 This gets the Jackal nice and close for an easy shot. Red line is the Jackal’s approach. 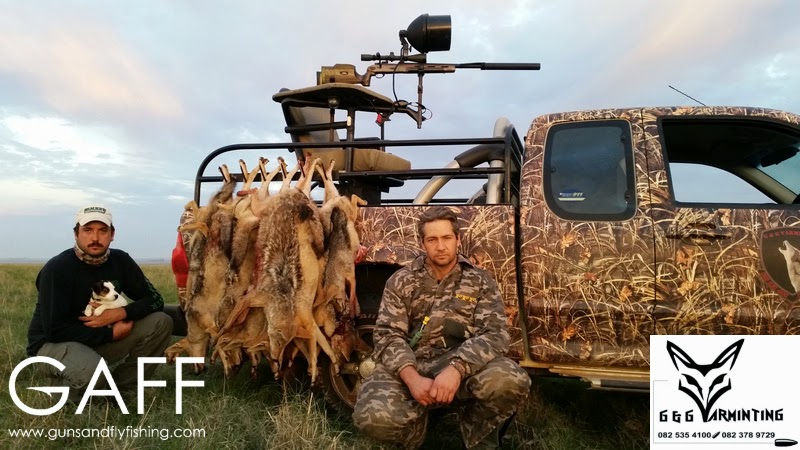 If you have any problems with Jackal or Caracal killing your game or livestock, please do not hesitate to give G&G Varminting a call: