The Black Wildebeest (or White Tailed Gnu) is endemic to South Africa and is possibly one of the strangest looking antelope that you will encounter in South Africa. It is not as common as its cousin the Blue Wildebeest and they prefer grasslands and open plains to the bush. You will usually find them in the same habitat as Blesbuck, Eland and Springbuck where they can be found in big herds, grazing on short grass.

They can sometimes be quite comical in their behaviour and for those of you who have seen them running around in circles for no apparent reason; you’ll know why the Black Wildebeest is referred to by some as the “clown of the bush”. But don’t to let their comical appearance fool you, as they can reach a top speed of about 80km/h which makes them one of the fastest African antelope. 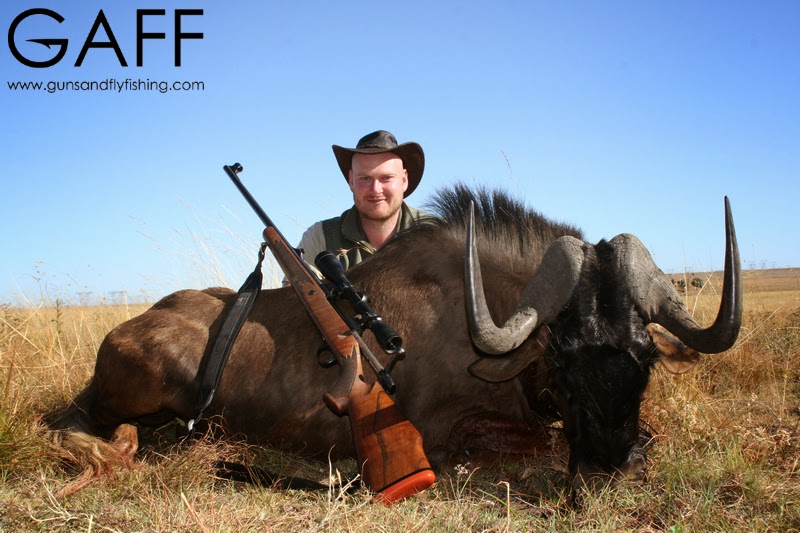 Black Wildebeest have very long tails covered with white hair, which is similar in appearance to that of a horse. When hunting for a Trophy Black Wildebeest bull, an old trick of the trade is to look for the bull with the longest tail. If a Black Wildebeest bull’s tail is touching the ground, then it’s almost sure to measure for the record books (their Rowland Ward minimum is 22 7/8” and their SCI minimum is a score of 72). However crazy this might sound, it has been a well proven trick used by professional hunters and I have seen it with my own eyes on a number of occasions. 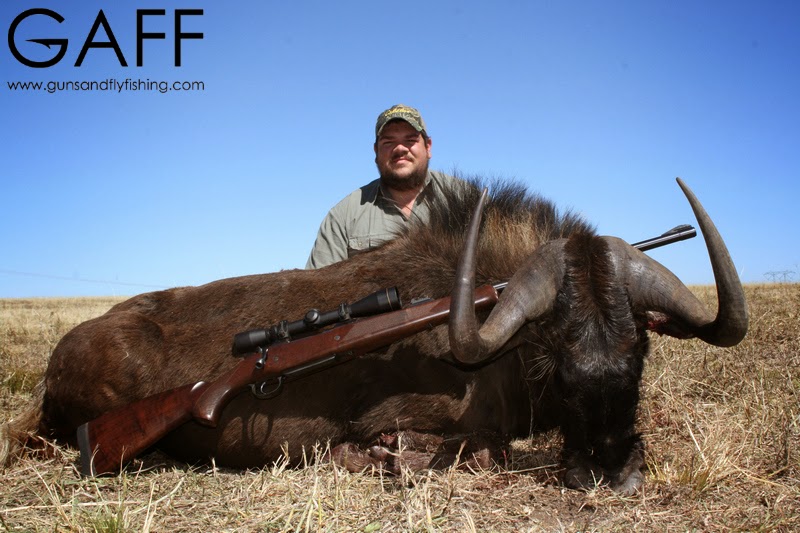 They are not an easy animal to hunt, not only because of their blistering speed but also because of the habitat in which they are found. Wide open grassland plains or “Highveld” as its better known in South Africa, offer little to no cover at all for the hunter stalking on foot, which makes Black Wildebeest very challenging to hunt. It is not impossible to hunt them on foot, and it is still the preferred method to hunt these truly unique animals, from a fair chase point of view and where possible. 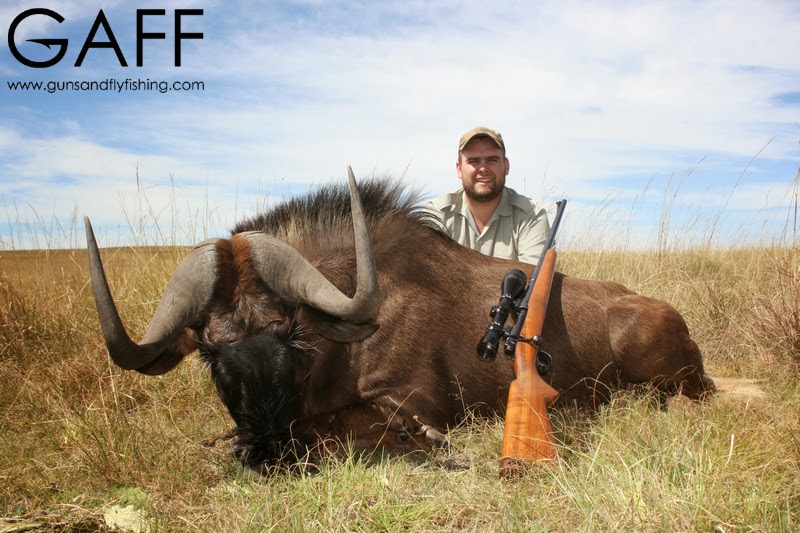 Most hunts for Black Wildebeest are conducted from a hunting vehicle in open terrain, and even then the average shots taken on these animals can be anywhere between 200m to 400m and more. It can be quite difficult to single out an individual animal in a herd as they can congregate in vast numbers and as both the bulls and the cows have horns, which makes their gender difficult to distinguish from a distance. The other problem with hunting them is getting them to stand still in order to take a shot. 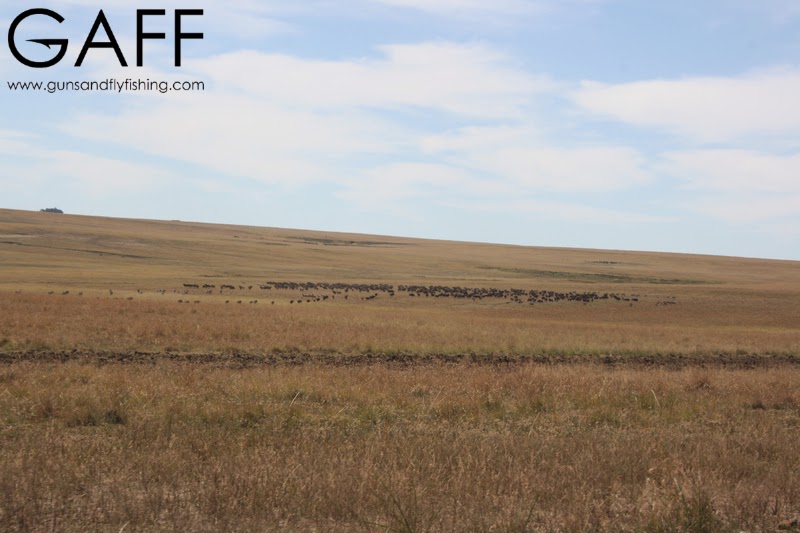 When hunting Black Wildebeest from a vehicle, the average window of opportunity to take a shot will be anything from 2 to 4 seconds on average before the animals in the herd will start to move around or run away. It is thus very important that you know your rifle well and that you are familiar with its caliber’s trajectory over longer ranges. It is also important that you have practised beforehand at these longer ranges to eliminate any chances of wounding an animal.

In areas where Black Wildebeest are frequently hunted from a hunting vehicle in open terrain, the animals can become suspicious of the hunting vehicle over time (especially white vehicles), associating it with danger, which is the reason that they don’t hang around for too long when they see a hunting vehicle approaching in the distance. 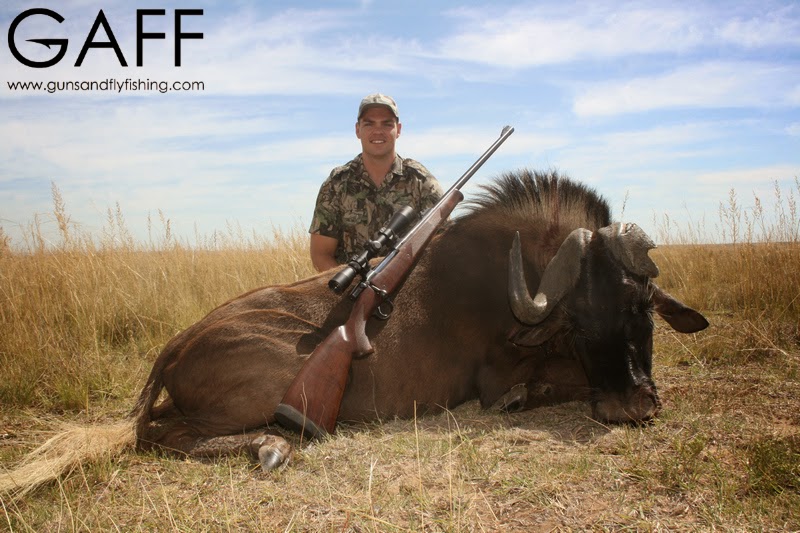 You ideally want a 6.5 mm and larger rifle caliber with premium bullets and a flat trajectory to hunt these animals as most shots will be taken at long range. A 6mm caliber (such as a .243 Winchester) with a premium bullet of about 87 to 100gr should be considered the absolute minimum effective caliber to be used on these animals, but then shot placement is absolutely critical. A flat shooting 7mm or .308 caliber with a 150gr bullet would be the better and recommended choice for hunting Black Wildebeest.

Black Wildebeest are one of my favourite African antelope to hunt and they are still relatively affordable to hunt in some places. Their horns make for a great shoulder or skull mount (European mount) and they make for good eating too. 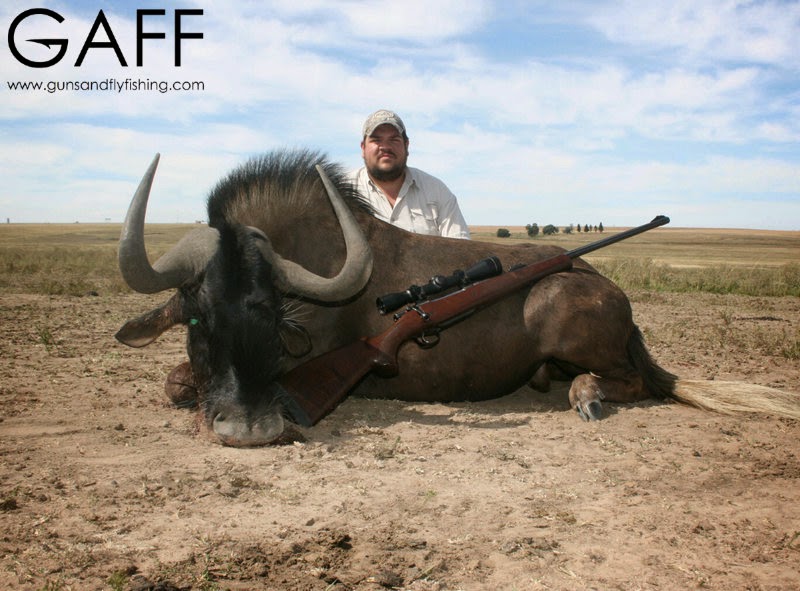 I hope that you too will develop the same admiration and respect that I have for the “clown of the bush”.