I think most of us (unfortunately) can only dream of fly fishing those exotic locations that lie beyond our borders. A trip to these idyllic destinations can cost an arm and a leg and it’s already hard enough standing up straight on two legs fishing in the Vaal!

Places like New Zealand, Idaho and Kamchatka are destinations that most of us will only see in magazines or on DVD’s.
But who would have known that we have some equally epic fishing here in South Africa? 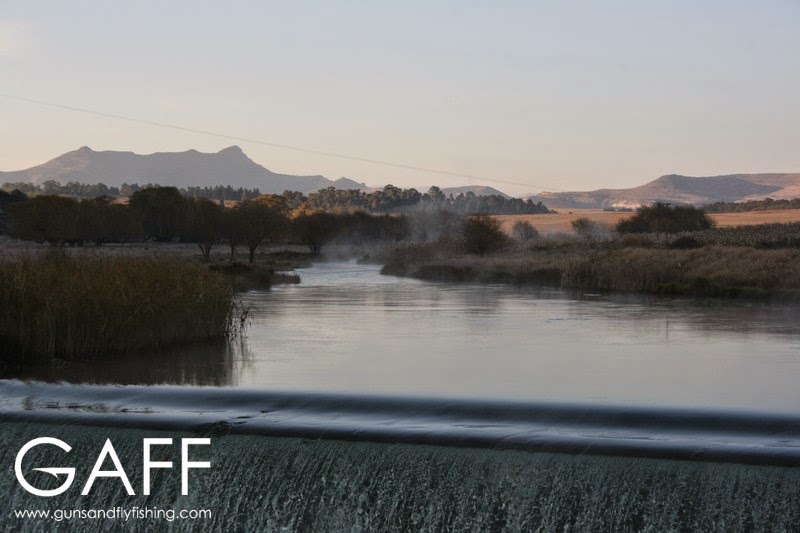 Not too long ago I heard rumours of the Ash … tales of huge trout spawning wild in crystal clear, ice cold water coming out of the Lesotho highlands. Only a few people know of the Ash and its resident population of trout and most of them said the water is close to unfishable and that I would be wasting my time trying the water is so fierce and fast flowing. This sounded like a challenge to me, and one I couldn’t resist. 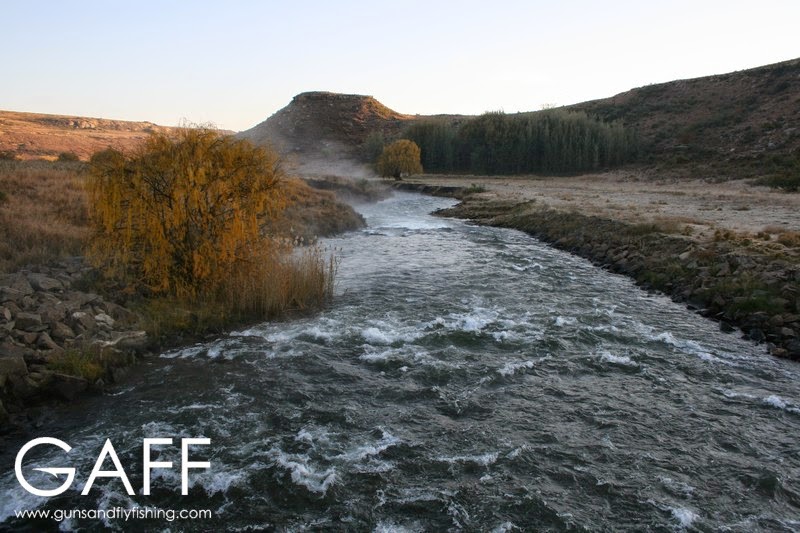 The Ash River is in essence a manmade river. It is part of the Lesotho Highlands Water Project which channels water from the Katse Dam in the Maluti Mountains in Lesotho into the Ash River between Clarens and Bethlehem, then into the Liebenbergs Vlei River which joins the Wilge River near Frankfort before finally reaching the Vaal Dam to help ensure we have plenty of water up here in Gauteng.

We arrived in Clarens on Friday afternoon to meet our guide for the weekend. He was kind enough to arrange accommodation at a guesthouse situated about 5km from Clarens on the Fouriesburg road. We agreed that we would meet early on Saturday morning at Destination X on the Ash river. 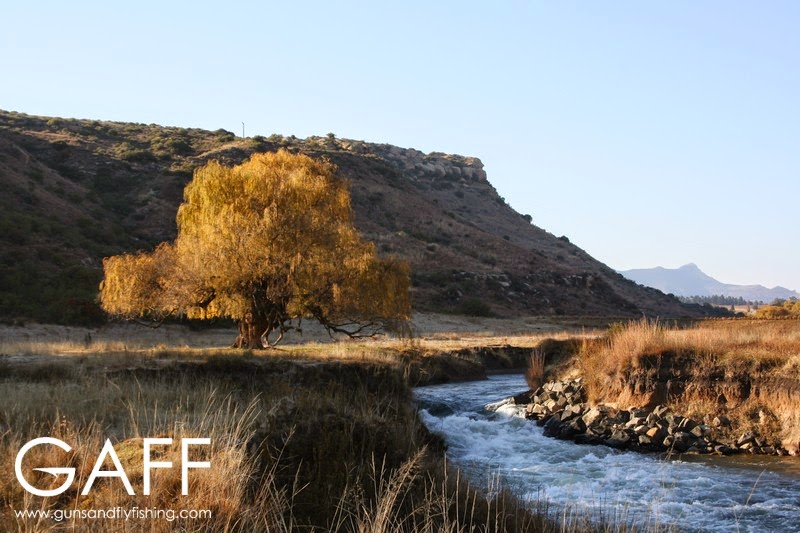 As you can imagine I didn’t get much sleep the Friday night, being quite excited and intimidated at the same time.

Saturday morning came and I was greeted with a flat tyre I noticed while I was loading gear into my truck, but this did not dampen our spirits, as we changed the tyre and made our way to the Ash River. When we arrived at the weir where the guide suggested we meet, I immediately felt under-gunned with my 5wt when I saw how fast the river flowed, and so I opted for my 7wt Horizon TRS. 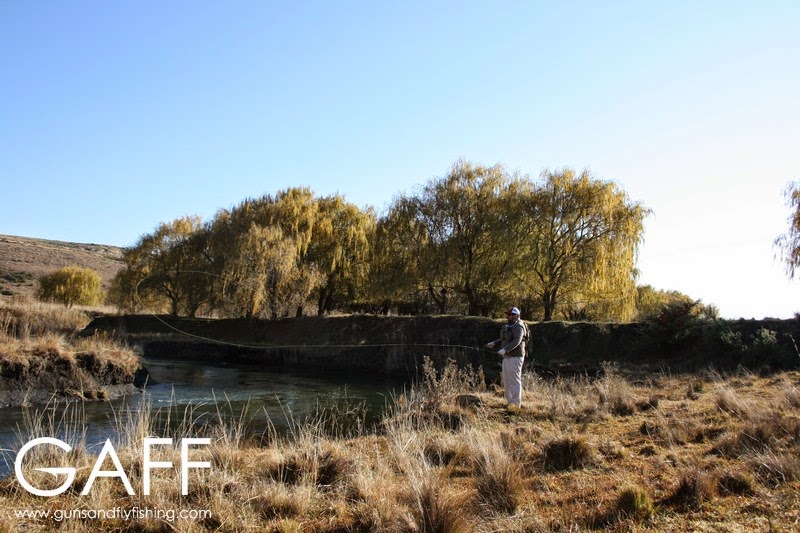 He briefed us on possible areas we should concentrate on to find fish as well as dangerous areas to avoid. There were a couple of spots where the river bank has eroded and walking there you could easily fall into the river. He said that if we did fall in at these certain places you wouldn’t be returning home. 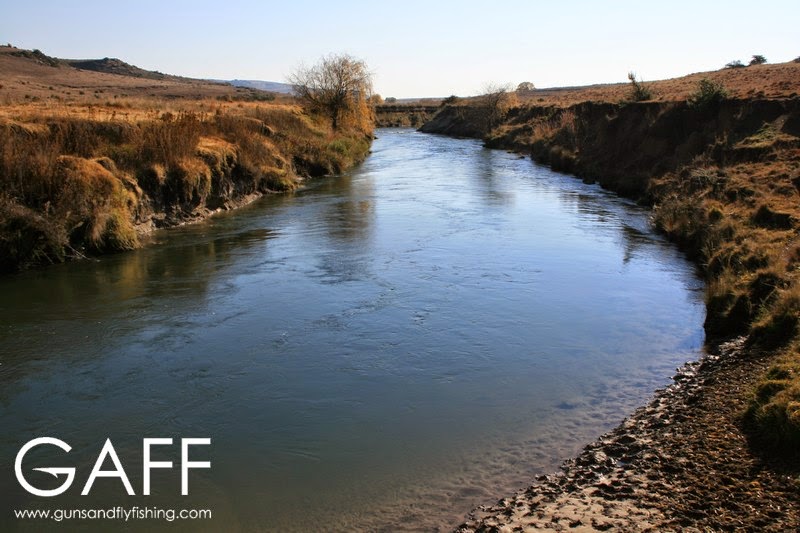 I started out with a floating line and a big and very heavy tungsten bead head Woolly Bugger. My first tactic would be to try to find fish with this fly and then maybe switch over to a more natural pattern later. Again there were no rules, no proven tactics. The guide also said that there has only been a handful of people on this stretch and that no successful patterns or tactics had been established to date. 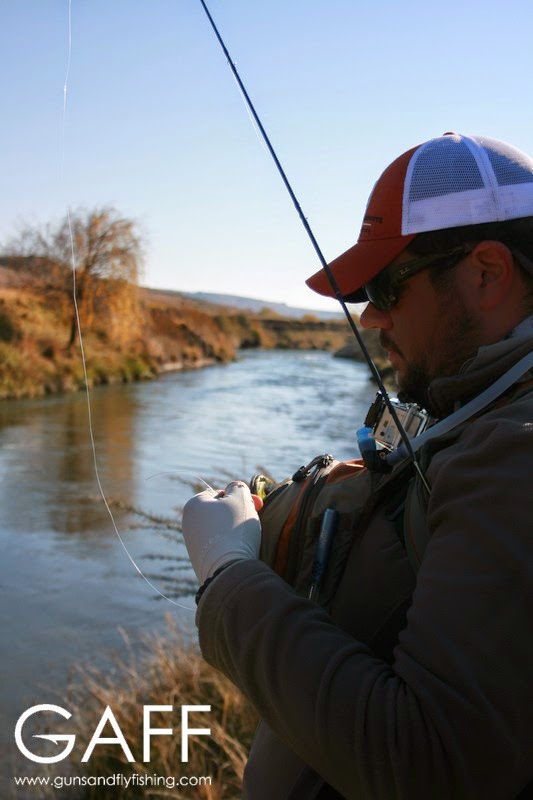 With my first cast I realized that it was going to be a long day because the moment my fly line landed on the water and before I could even mend my line, it was already washed to the side on the rocks at my feet. I then regretted not having my fast sinking line with me… 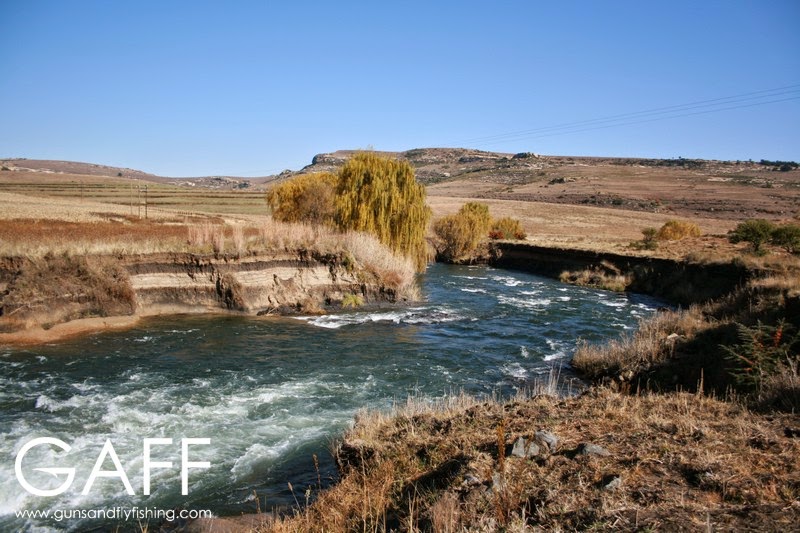 We tried to cover most of the 4 km of the Ash available to us for the day, and unfortunately we only had a limited amount of time, so we had to fish as much of the water as fast as possible. 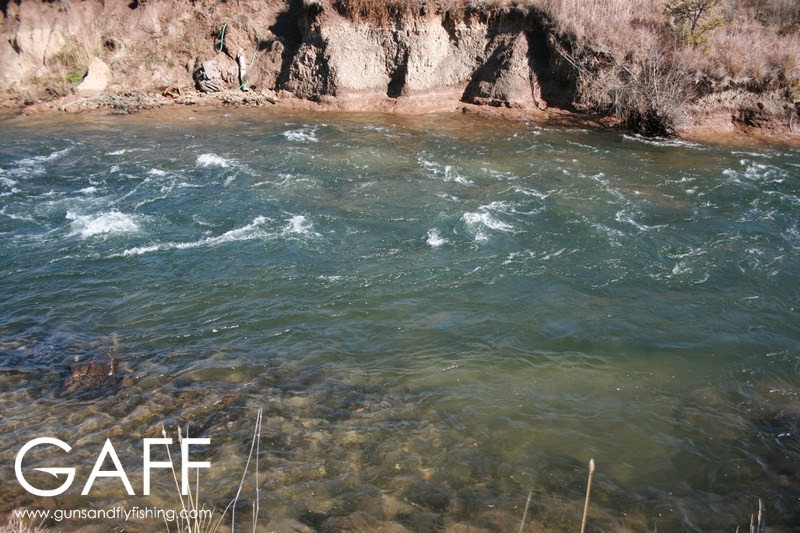 Later in the morning I spotted a shallow and slower piece of water next to the river bank which I suspected could hold some fish. After having no success with streamer patterns (expect for one missed strike) I then tied a #8 two-tone caddis on as my heavy dropper fly and a #14 black flashback mayfly nymph as my point fly. I cast the New Zealand style rig without a strike indicator upstream and tried to maintain a dead drift on the fast water.

I didn’t have much hope as I suspected that my flies weren’t heavy enough to get down, but lo and behold, my fly got eaten. 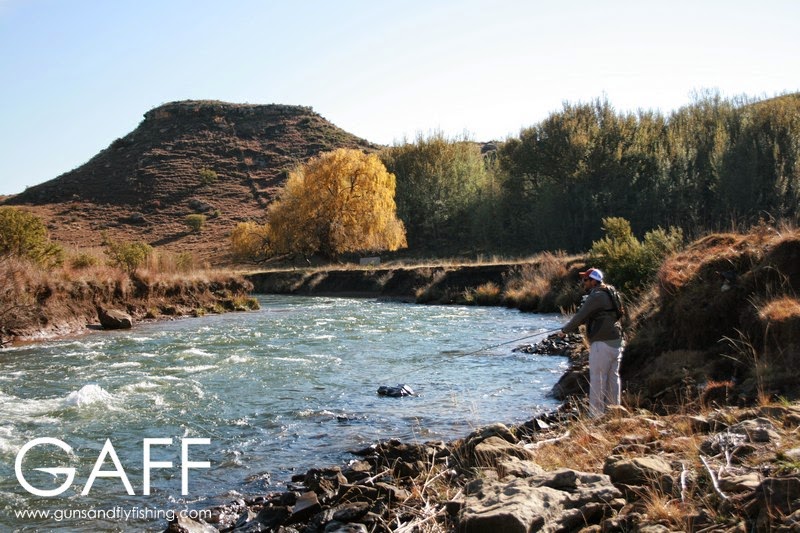 It felt like a tree trunk at the end of my 3X tippet in the strong current and I didn’t have much hope as I saw the shadow of the big rainbow trout that had taken my fly. It emerged from the bottom of the gravel bed and fortunately it decided to swim upstream.

If it headed downstream I would have probably headed home empty handed as it would have snapped my tippet like thread. I tried applying as much pressure as possible, and luckily my friend and cameraman, Quintin could handle the net and I only had to concentrate on landing a beaut of a fish! 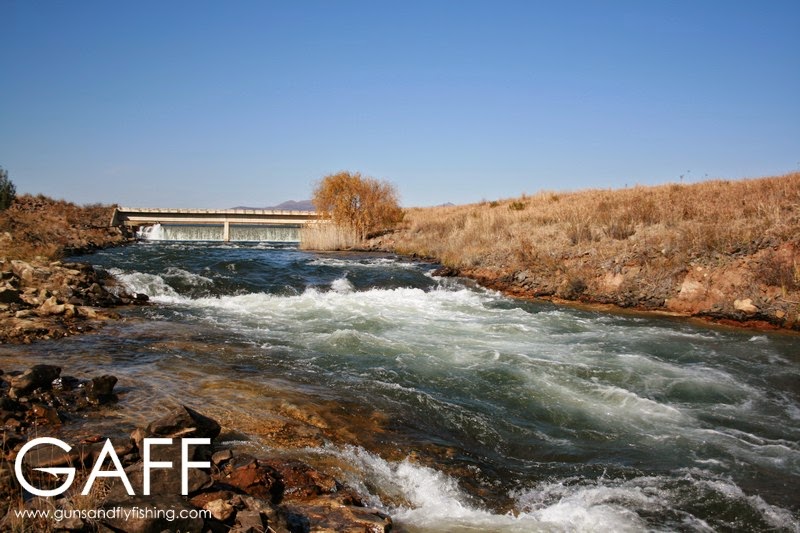 We landed the fish and I could finally breathe again! I removed the little black mayfly imitation from its mouth, and when I lifted it from the net I couldn’t believe how pretty this fish was. After taking a couple of quick photos I didn’t waste any time getting her back into the water. The water was very cold, and without much reviving the beautiful hen fish swam back into the river. 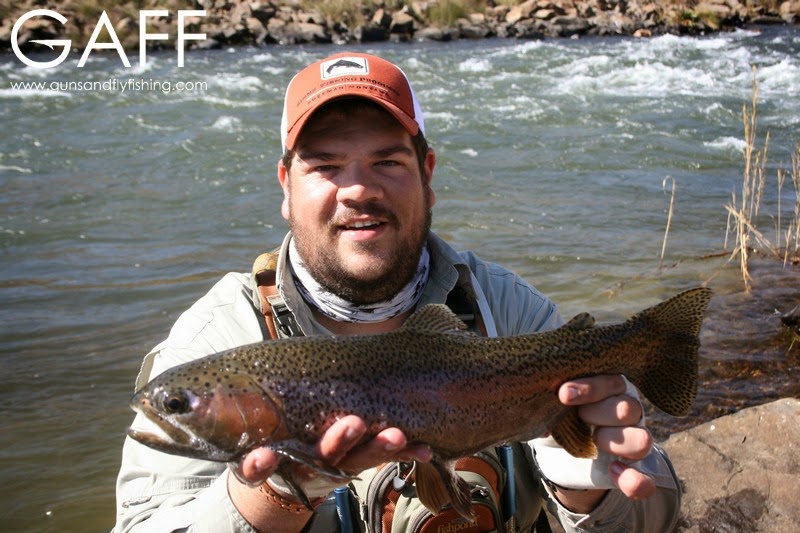 Personally this was a very special moment for me and one I will treasure for years to come. We are indeed very privileged here in South Africa to have some pretty spectacular places we can go fly fishing and the Ash River is without a doubt one of them. 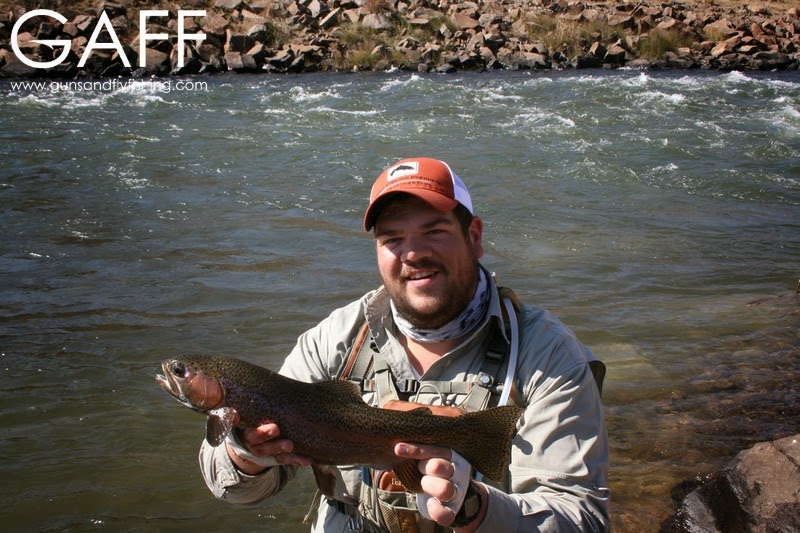 There are some very big fish in this river… I saw a couple of cell phone photos and I estimated one of the fish in the photos to be in excess of 10 lbs. I will surely return in search of one of those giants… 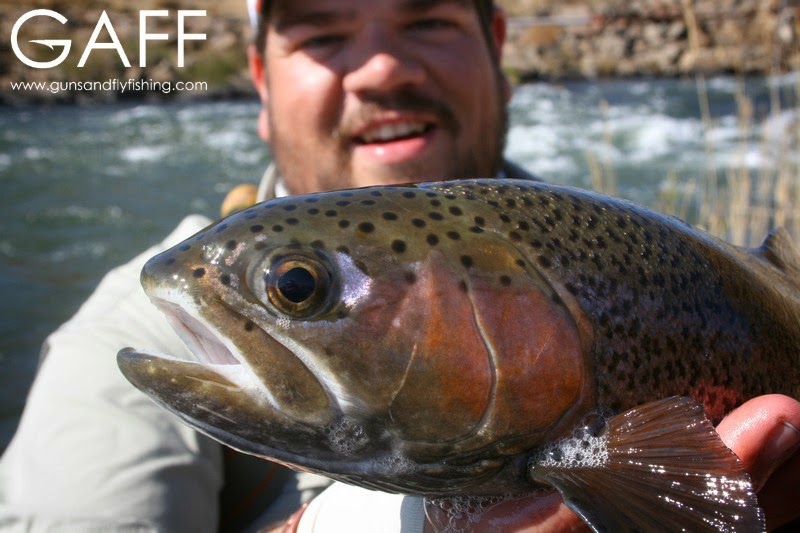 Here is the video: