One of the biggest problems with living in the city is that fly fishing opportunities are few and far between (unless if you are a fan of stew ponds) and the few places that are unspoilt with resident fish are a very close kept secret to a select few (if any). The only way around this dilemma is to follow your taste for adventure and to explore your urban surroundings on your own. This is exactly what we did, and thankfully so. 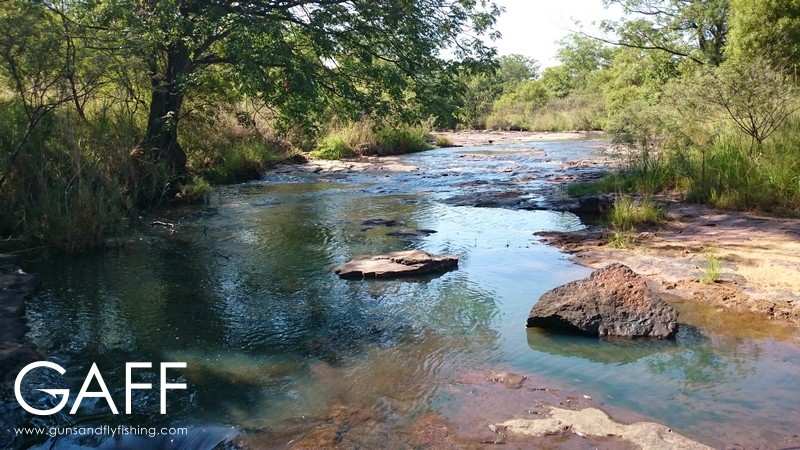 We made use of Google Maps (some say it was developed for the adventurous fly fisher in mind) and we identified a potential area not too far from our concrete surroundings. We contacted the land owner, begging him for permission to fish his property and luckily he turned out to be a keen fly fisherman himself! 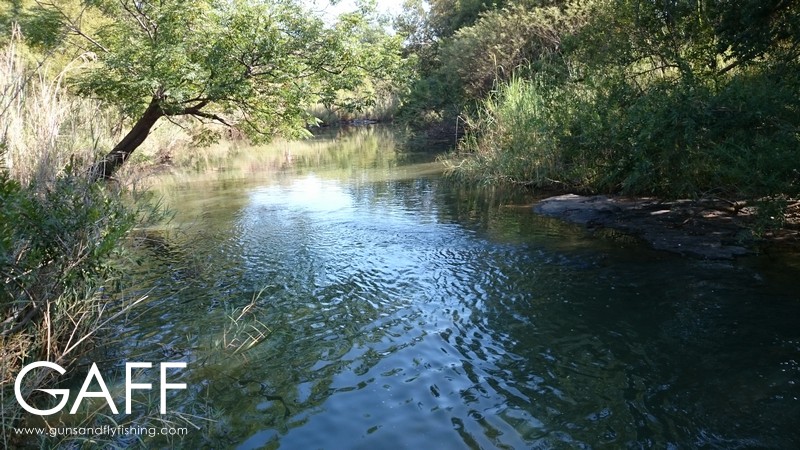 Stephan and I arrived at our destination, met up with the land owner and quickly unpacked our gear before heading down to the river. Within the first 5 minutes both of us had about 74 Tick bites each. This did not dampen our spirits however and we started to explore this beautiful piece of property. 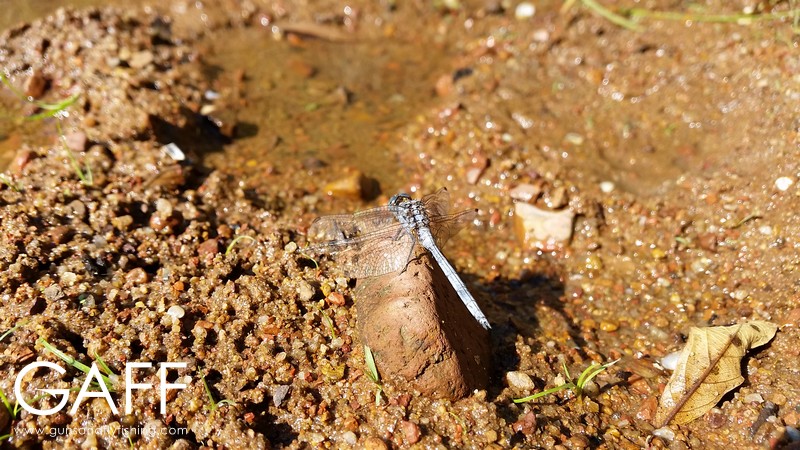 We had a bit of the hike and after about 3km in the bushveld sun I realised that it’s probably a good idea to renew that gym membership again… Along the way we encountered some Warthog, Kudu and a few Impala that were grazing leisurely, not bothered much by our presence. 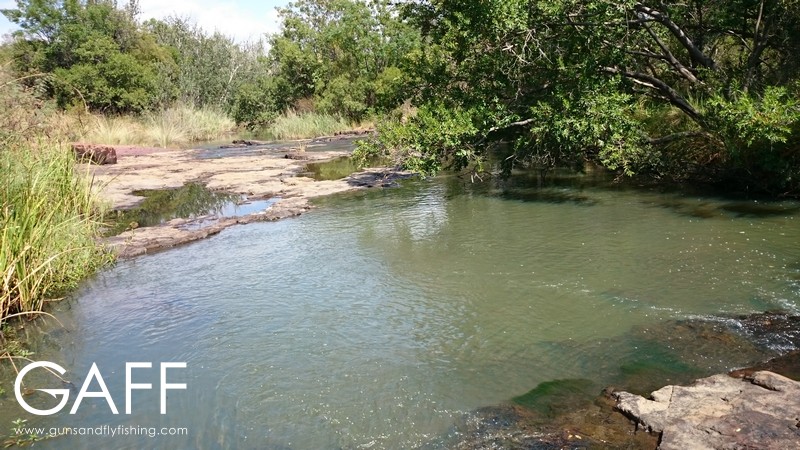 Huffing and puffing, we eventually reached a piece of river that looked promising and I opted for a hopper dropper rig to search the water for some action. I made a cast upstream and moments after my second drift I noticed a slight pause in my indicator fly; I gently lifted my rod tip and I was into a fish! My initial thoughts was that a Largescale Yellowfish took my #20 PTN but it turned out to be a beautiful smallstream Spotted Bass. It was a good start to the day and in good spirits we continued prospecting the river for some piscatorial pleasure. 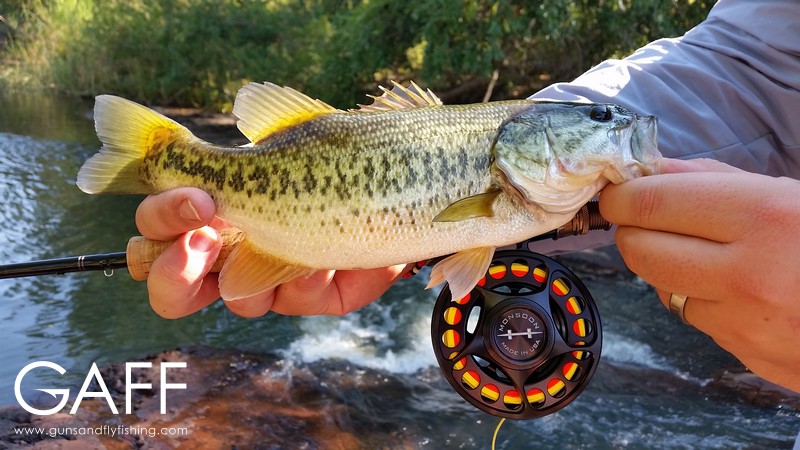 We couldn’t see much fish activity and so we concentrated on mainly structure and potential places where the fish could hold. Our main focus was Large and Smallscale Yellowfish but we were pretty much keen for anything to take up our feathered offerings. The Bass were quite willing to play along though and they kept us entertained as the storm clouds started to brew in the background. 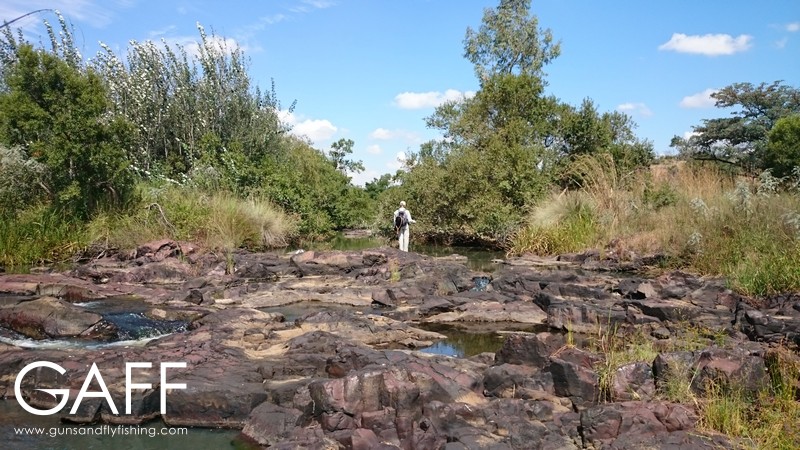 I wandered off on my own whilst Stephan focused on a promising pool, and just as I parted a patch of reeds to get into the river a baby Crocodile (about 80cm long) that was basking in the sun got startled and leapt into the river swimming away. My initial thoughts were that it was a Monitor Lizard but, it had unmistakeable Croc characteristics (teeth and stuff). This made me approach the water with a bit more caution but it didn’t stop me from further exploring the gem of a stream. I wasn’t afraid of the baby Croc (as I am 6’7”) but the possibility of its parent’s presence was the reason for my concern… 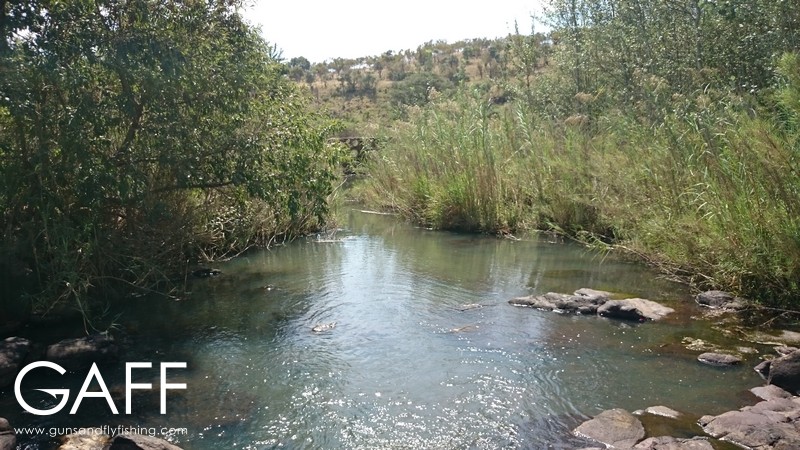 Later the afternoon the land owner caught a pretty Smallscale Yellow on a #16 ZAK Nymph and Stephan and I caught some more Bass and a few Tilapia or “Kurper” as we call them. The storm was approaching fast, and as I have a fear of lighting (second only to a Cocker Spaniel) we called it a day. The owner welcomed us back whenever we wished to do so and we gladly accepted his offer before heading home. 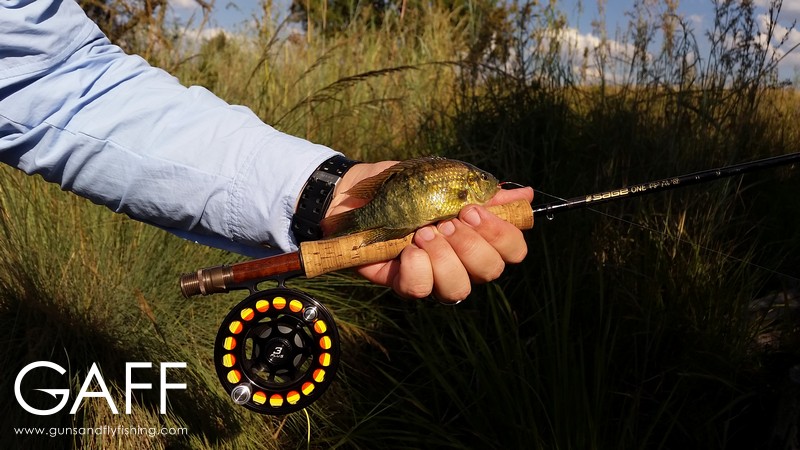 So you see, you don’t have to settle for the local stew ponds and you don’t necessarily have to drive hundreds of kilometres to find a good fishing spot, just get out there and explore. Oh, and watch out for the Crocodiles…